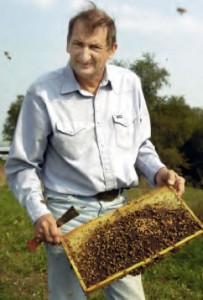 Honeybees will die in greater numbers this year than ever before, and court fights over the chemicals some believe are killing them will continue to be a cat-and-mouse game.That’s the opinion of Lewisburg beekeeper Dave Hackenberg, who last week was in Orlando, Fla., at the North American Beekeeping Conference with about 750 of his peers.He’s considered by many of them, and others worldwide, as the authority on colony collapse syndrome.That’s when an entire hive of bees dies for no apparent reason. It’s been happening since 2004, coinciding with introduction of a new kind of pesticide.Instead of being applied on the exterior of a mature plant, the plant’s seed is coated with the pesticide, Hackenberg said. When the seed is watered, some of the pesticide gets into the soil and then is taken up into the plant in the normal growth process, just as the plant absorbs nutrients from the soil.In this way, the pesticide becomes internal, or “systemic,” rather than applied.Some beekeepers believe, as bees pollinate the plants, they are exposed to these pesticides and it eventually kills them.Manufacturers of the chemicals say they are safe.The argument played out in federal court Dec. 23 in New York in a suit brought by the National Resource Defense Council and the United States Department of Environmental Protection against Bayer CropScience.Judge Denise Cote originally ruled that a pesticide with the active ingredient spirotetramat, manufactured by Bayer worldwide under the name Movento, must have been pulled from the market by Friday. But Bayer came back arguing the ban was based on procedure rather than science and got an extension to Feb. 16 to straighten out the paperwork with the EPA.“We anticipate that EPA will reaffirm the registration of spirotetramat using the correct procedure,” Bayer said in a statement.Meanwhile, bees are needed in California to pollinate crops and, Hackenberg said, they’re facing extreme shortages.Even if the ban were restored, he said, bees will continue to die because the chemical stays in the soil for about four years. And there’s a market basket of chemicals out there.The companies continue to alter the chemicals when their patents run out, so they will have exclusivity on the new ones.It used to be, Hackenberg said, that a proposed new chemical would be “handed over to the great land-grant universities for testing.”Now, he said, there’s no such research.The EPA’s new attitude is, he said, “Just put it out there and we’ll see what happens.’’“The chemical companies have been give a green light right through the front door,” he said.Hackenberg met Wednesday evening with a chief toxicologist from Bayer and, not surprisingly, there was no meeting of minds.We say we’re losing bees, Hackenberg said, and he says the science doesn’t show it.“No,” Hackenberg said, “reality does.”Despite the reality, however, many beekeepers don’t grapple with the science. Some are naive, Hackenberg said, and tend to believe what they are told — whether it’s mites or mold or the phases of the moon.“They don’t understand these new systemic chemicals,” he said.Few farmers in the Valley, he said, even know anything about the chemicals they’re using.“If you talk to them and ask them ‘Do you know what you’re using?’ or ‘Do you know how it works?’ many will say no, they pay a crop analyst for that.“The crop analyst goes out and looks at the crops and tells them what to use.”Hackenberg said if you ask the crop analyst how he knows what to recommend, he’ll say the chemical companies tell him.It was unknown whether the members of the conference, which ended Saturday night, would draft a resolution against the use of products that contain the suspect chemicals.That’s analogous to the doctor who prescribes pills based on what the pharmaceutical sales rep tell him, he said.Meanwhile, honeybees remain essential to about one third of all the grown food humans eat. In the United States, they pollinate 90 different agricultural crop species including nuts, berries, fruits and vegetables worth about $15 billion a year.