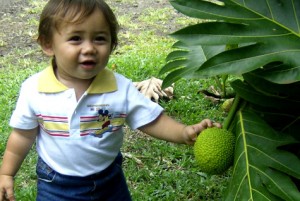 Could Man Live by Bread(fruit) Alone?

As its metaphorical name implies, breadfruit tree (Artocarpus altilis-Moraceae) is an excellent example of how abundantly Mother Nature can provide for us. The Breadfruit is originally from New Guinea, and possibly Indonesia and the Philippines. It was spread throughout the Pacific by the island voyagers who carried root cuttings in their canoes. You won’t find breadfruit growing anywhere in the fifty States but Hawaii, which is where I began to grow breadfruit and ate it almost everyday of my seven year residence.

As its metaphorical name implies, breadfruit tree (Artocarpus altilis-Moraceae) is an excellent example of how abundantly Mother Nature can provide for us. The Breadfruit is originally from New Guinea, and possibly Indonesia and the Philippines. It was spread throughout the Pacific by the island voyagers who carried root cuttings in their canoes. You won’t find breadfruit growing anywhere in the fifty States but Hawaii, which is where I began to grow breadfruit and ate it almost everyday of my seven year residence. When I moved to Hawaii I fell in love with the rich, cantaloupe taste of ripe breadfruit and then the savory taste of breadfruit cooked with coconut milk and onions. My first breadfruit literally fell into my plate from a tree I was eating under. My husband and I had pulled off the road to prepare lunch in Kipahulu, Maui. It was quite hot and we looked for a shady place to rest. We found a spot under a dense jungle canopy 100 feet into the sky. As my husband was tossing the salad we heard a rustling in a tree far above us. Suddenly there was a large crash and the salad bowl was ripped from my husband’s hands and we were covered with a warm, sticky, glue that is very ripe Breadfruit. The Breadfruit had fallen right into the salad plate. I wiped the sticky glue out of my eyes and tasted it. It was at that moment that I fell in love with Breadfruit.

We bought property very close to the site of my first breadfruit encounter. My neighbor, a friendly Hawaiian elder, pleased with my passion for this non-western food, took me into the dense jungle behind our farms where old breadfruit trees grew almost seventy-five feet tall. There in the dim light he showed me how to propagate the tree from a root cutting and told me how to care for the plant in the crucial, earlier, months. This process, I later learned, was more of an art than a science with Breadfruit. He was an excellent teacher, more, he was a “kupuna” (a wise Hawaiian elder) and three years later, I had two, twenty foot high, trees that started to bear hundreds of fruit, the size of a human head over the course of a year.

This abundance is the main reason that, on many tropical islands, breadfruit is the number one food plant, plus the fact that the tree can grow not only in the moist jungles but in the coral sands and saline soil of desert islands as long as it has enough water. In many island cultures, when a child is born, the family buries its placenta and umbilical cord along with a breadfruit starter. That tree is considered the child’s. He is expected to care for the tree during his life. It is a beautiful way to began to teach a child that nature is his mother and the reciprocal essence of this relationship.

The trees are monoecious, which means that male and female flowers grow on the same tree. The male flowers emerge first. Its punk like shape, a very masculine form in the human sense, often leads to knowing smiles and a round of bawdy jokes, especially when shortly afterward, the female flowers emerge right next to the faux phallus, and grow into the round, bosomy, fruits. The pollinators for the Breadfruit are Old World fruit bats which happen to be the only indigenous mammal on the Hawaiian Islands.

There are many species of Breadfruit and two types, one with seeds and one without. The variety with seeds is called the Breadnut. Most varieties do not have seeds and propagate themselves by young trees sprouting up from its roots. On islands where the seeded variety grows, the people eat the large nuts boiled in salted water or roasted much like chestnuts. The leaves of the breadfruit tree are 2-3 foot long, thick, glossy with the appearance of a human hand. When the diplomatic delegates of different island nations come together for meetings, they often bring a leaf from their local breadfruit cultivar as a symbol for their people. 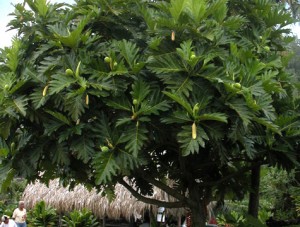 Breadfruit, depending on its degree of ripeness, can be either a potato-like starch or like a pudding. You can tell it is ripe on the tree when the fruit turns yellowish green and a sticky sap starts to ooze out of its skin and starts collecting dust. The fruit starts to look dirty and it’s a clear sign that it is ripe. For cooking, it should be firm yet yielding to the touch. You harvest the fruit with a sharp blade from the top of the stem or by twisting it around a few times until the stem snaps off the branch. Fresh picked breadfruits leak copious amounts of white, sticky sap which at one time was used as glue or canoe caulking. Bearing this in mind, it is best to hold the fruit upside down and let the sap drip onto the ground and then rub the wound in the soil to stop the hemorrhage. Firm yet yielding fruits can be baked, boiled or fried exactly like potatoes. It is similar in taste to a potato at this stage because all of the potato-like starch hasn’t turned to sugar. Fruits that have fallen from the tree are ready to be eaten as a dessert. They are soft with the consistency of custard and taste like a dessert but contrary to custard it is extremely filling. Some people can eat only eat a few tablespoons. Civilized people eat it with a spoon. Barbara George of Global Garden Foundation describes the taste as “peach on steroids”. She did not eat it with a spoon.

Since a breadfruit tree gives so much food during its season, people have developed many ways to preserve the fruit. One way is to slice it very thinly, place it on racks, and put it in the sun to dry. Dried breadfruit is an excellent addition to soups and stews. For centuries, breadfruit has been fermented in order to preserve it. Westerners tend not to have a much developed taste for fermented food other than for alcohol, pickles and yogurt. Yet, fermented food is highly nutritious. One way to preserve breadfruit is to peel, slice and then bury washed fruits in a leaf-lined pit where they ferment over several weeks and produce a sour, sticky paste. Incredibly, some pits are reported to have produced edible contents more than 20 years later! The fermented breadfruit is removed from the pit washed and eaten or mixed with coconut cream, and mashed banana (optional) then baked into sour bread.

As to the name, “breadfruit”, I have never been able to find the definitive origin for the western term. The Breadfruit is called ‘ulu in Hawaiian. This word is of very early origin because it also refers to fruit in general and has a metaphorical meaning of being “fruitful”. The breadfruit is the “staff of life” just like wheat is in many western countries. Cooked breadfruit is like moist, starchy, bread while sweet, ripe breadfruit has the consistency of uncooked bread dough. 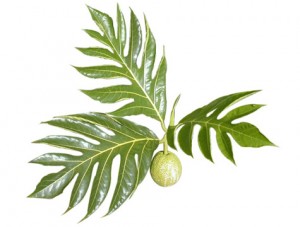 There is an old Hawaiian saying about Breadfruit “Lalau aku I ka ‘ulu I ka wekiu, I kea lo no ka ‘ulu, a hala”. – “You reach for the Breadfruit way at the top and miss the one in front of you”. This saying embodies the precious lesson that I learned in my Hawaiian garden. Grow and eat what is easily harvested in your local environment. I didn’t try to grow temperate zone plants in the tropics and here in Quebec I don’t miss Breadfruit because I have so many interesting, different types of potatoes to explore. Before Europeans came to the Pacific and introduced their foods, Breadfruit was eaten everyday. Today many indigenous people only eat it on special occasions. When Captain Cook first came to the Hawaiian Islands, he said that the Hawaiian people were the healthiest people he had seen on all of his many, long journeys and that they were the greatest gardeners in the world. Today, over 90% of the food eaten in the Hawaiian Islands is imported and the health status of native Hawaiians is among the poorest in the entire United States. Most native Hawaiians have a breadfruit tree around their house planted by their ancestors, but many don’t harvest the fruit. Even our neighbors, like good modern people, were proud to come home with their hands full of plastic bags filled with imported industrial food while their breadfruits rotted on the ground. At one point, they even had the tree cut down in order to grow flowers for export. It was a sad sight. The Hawaiians story is a powerful cautionary tale concerning loosing identity and a place to garden and thereby loosing life and well-being. Growing our own food is the best form of food security and it keeps us healthy and prosperous in body and soul.