Keys to Kindness: the story about a piano…

A story narrated by a Baby Grand Piano intermingled with interviews of all the people that played a vital role in this story. It is a story of one kind act inspiring others.

THE OPENING SCENE: The piano Dennis (“Doc”) Williams, Pianist & O’Jays Musical Director, at NY Waterway Midtown Terminal… WE HEAR THE VOICE OF THE PIANO NARRATING: “Hello there, let me introduce myself. That’s right I’m the piano at the New York Waterway Ferry Terminal on 39th Street. How did I get here? Well, to answer that question, first I‘d have to take you back to my home in Goshen, New York. You may know of Goshen because it’s famous for being the Birthplace of Harness Racing. They even have a Trotting Horse Museum on Main St… It’s also the Capital of Orange County… AND Willie ‘The Lion’ Smith (the famous jazz pianist) was born in Goshen! It’s also known as the Land of Milk & Honey and there are many kind and generous people who live there…

Anyway, it was two years ago when the Mayor of the Village had an inspired idea to make music and the arts more accessible to everyone! He called his project “The Keys of Goshen”. He asked a few generous residents to donate their pianos and then the artists from the local Art League painted each one of us with beautiful, fantastic scenes…and people came from far and wide to see and play us! I loved being played by all the people! So when we were all auctioned at the end of the season, I was over the moon with excitement when I found out that my buyer wanted to gift me to someone who would make it possible for even more people to see and play me, the owner of the NY Waterway Ferry Terminal!” (INSERTED INTERVIEWS: Mayor, Donating Family, Art League, Artist, Piano Restorer, Tuner & Transporter, Building Owner, Concert Pianist, Arthur, The Ferry Owner and me. I will explain about the earlier kindness of Arthur who, in 2009 offered the terminal as a location to host our Charity’s fundraiser for Katrina victims, who still needed help to rebuild, 4 years after Katrina.) RETURN TO THE PIANO:“It’s amazing how one kind action can inspire so many more kindnesses!”

Global Garden President, Barbara George, gifted this special piano to Arthur Imperatore and the NY Waterway Ferry Service to repay an earlier Kindness when Mr. Imperatore offered their Weehawken Terminal as a venue to host a Global Garden concert and auction to help raise money to rebuild New Orleans, post-Katrina. 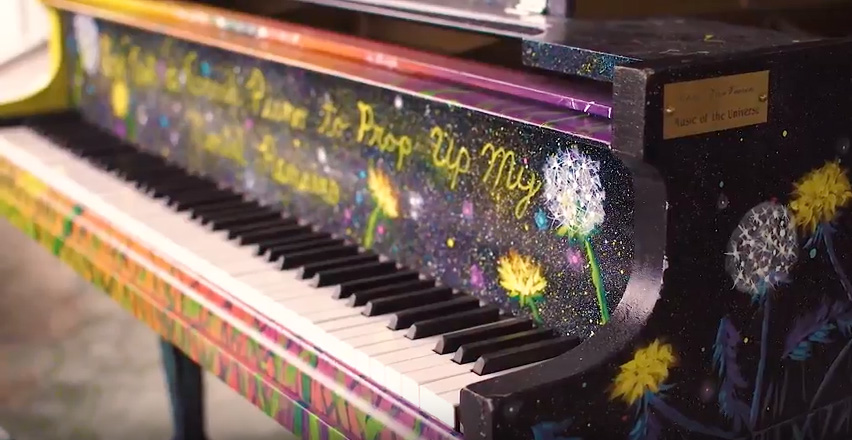 After a season of being enjoyed by residents and visitors, from far and wide, “Music of The Universe”, as titled by its artist and painter, Chris VanVooren, Vice-chairman of the Goshen Art League and Vice Chairman of the Greenwood Lake Chamber of Commerce, the pianos are auctioned to help raise money for the next year’s program.

Now in its new permanent home at the NY Waterway Ferry Terminal at 39th Street in Manhattan, this Global Garden gift of “Music of The Universe” a painted baby grand and its story, celebrating music, art and kindness will serve to inspire visitors and travelers for generations to come!